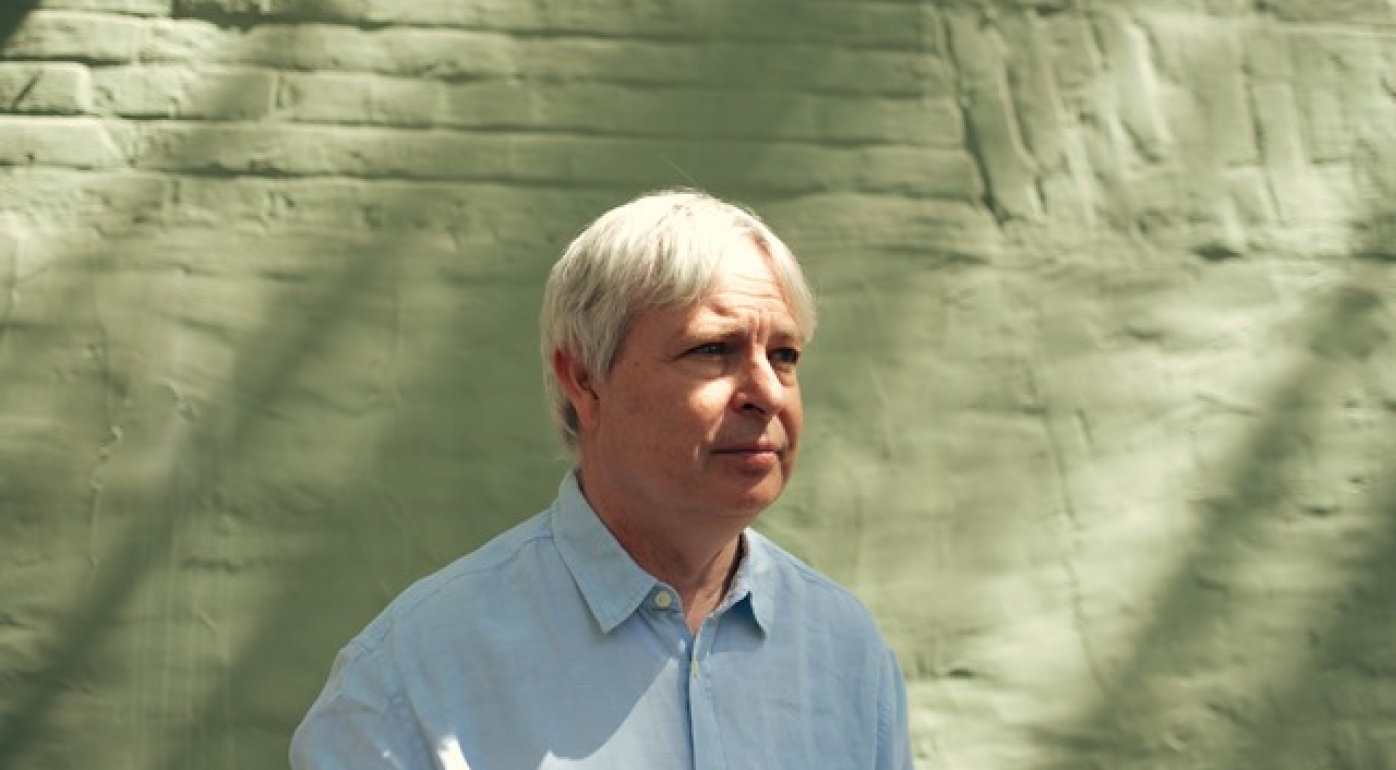 Those who interpret some of my books as subversive political satires and conclude that I am a natural-born rebel have not been reading closely enough. By nature I am one of the most timid and conformist of men. I have a natural deference towards authority and I usually do what I am told. As an Englishman I am also incurably polite and, when visiting a foreign country, defer without question to the wishes of my hosts.

The morning of Friday, 19 May 2017 found me standing in the sunshine in Golden Gates Park, Kyiv. With me were five other British writers: Kit de Waal, Stuart Maconie, Cat Weatherill, Alan ‘Kurly’ McGeachie and Jonathan Davidson. We were accompanied, too, by our translator Irina Zaytseva and our guide Halyna Tanay. Over the next three hours, Halyna and Irina would take us on a superbly well-prepared and informative tour of the city, with a special emphasis on sites of literary interest.

It was a highly organised tour. At the beginning, we were each given a small envelope containing individual printed notes about all the landmarks we would be seeing. An additional piece of paper contained instructions, unique to each participant. Some people were told to write about smells, others about sounds, or buildings. I was told to make voice notes – which I took to mean that I could write about anything I wanted, but I should record voice memos on my smartphone as an aide memoir.

"As I said, I am an obedient person, so I did not question this instruction, but accepted it happily."

And so the tour began.

From the Golden Gates Park, we walk west along Yaroslaviv Val Street, until we come to the first point of interest on our excursion: the home of Ukrainian painter, scenographer, book illustrator and designer Anatole Petryts’kyi, a famous proponent of cubism and futurism. I decide it’s time to make my first note, so I take out my phone. First of all I have to key in the four-digit passcode. I shouldn’t have to do this as often as I do, but for some reason the phone is programmed to lock down every few seconds, and I can’t work out how to change the setting. Then I have to find the voice memos app. Where the hell is it? A few days ago my youngest daughter, appalled by the mess on my home screen, tidied all the icons and put them in different sub-folders. But where is this one? There is a folder which she has usefully labelled ‘Stuff’ and maybe it’s in there … Oh well, we have finished at Mr Petryts’kyi’s house anyway, and I’ve been so busy trying to find the app that I didn’t hear any of Halyna’s commentary and I didn’t manage to record a voice memo either. On to the next stopping-point… 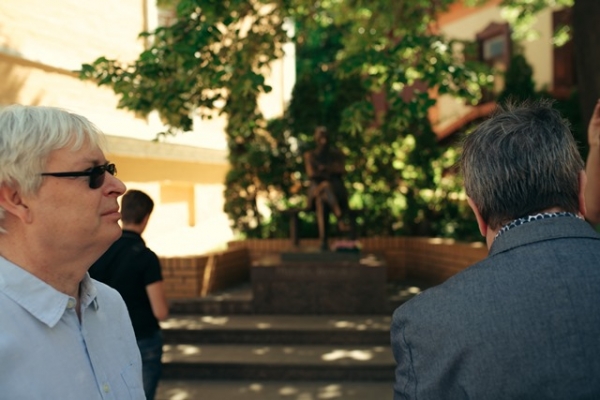 This is the house where the writer and translator Borys Antonenko-Davydovych lived, at Striletska Str. 15. He was a prominent member of ‘Lanka’, one of the most influential Ukrainian literary groups of the 1920s. I can concentrate now on what Halyna is saying, because I’ve found the voice memo app and I think I know how to work it. The trouble is that I can’t think of anything worth recording. Eventually I hit record and whisper into the microphone (self-consciously looking around to check that none of the passers-by are watching) a remark to the effect that the sky is a very deep blue and there are no clouds this morning. Then I try to save the memo but it doesn’t want to save. I push the save button repeatedly but nothing seems to happen. In desperation I press the record button again and I move on to a new memo and the previous one seems to have been lost. Well, who cares, it was the most banal comment imaginable, but it’s annoying anyway. I switch back to the home screen, go into the camera app, and take a picture of the sky, to remind myself how blue it was. But now I’ve forgotten how to get back into voice memos again. As I hunch over the phone, walking quickly down the street to catch up with everyone else, I bump into a woman coming in the opposite direction, also hunched over her phone. She apologises to me in English and we laugh.

As she walks on, I glance back at her. She must be English like me. A tourist, maybe. But she is not looking around her much, or even looking to see where she is going. She has earphones in her ears and her eyes are fixed on the screen of her phone.

Next stop: the building where a famous typographer, Ivan Chokolov, lived and worked. He published fiction, atlases, music and song collections; classics of Ukrainian literature by Ivan Nechui-Levytskyi and Hryhorii Kvitka-Osnovianenko, and works by great composers like Mykola Lysneko and … Jesus, what is the matter with this phone? It doesn’t want to do anything I ask it to. The screen has locked again and first I have to put in the passcode, then I have to get into voice memos, but it’s not giving me the option of recording a new one, it’s asking me to play the old one, which is a waste of time because I know that it’s blank. I’ll be honest; all I really use this phone for is sending tweets, text messages and emails. All these other apps represent a strange and foreign country to me. I look round to see where Kurly is, because he’s the youngest of our party and probably understands smartphones better than the rest of us. He’s on the corner of the street talking to Irina. I wander over but I don’t like to interrupt them because she seems to be telling him something interesting about the mélange of pre-war, Stalinist and 1980s Soviet architecture in this neighbourhood of Kyiv. And yes, looking around (for the first time) it does seem to be a pretty interesting part of town.

"I should record this fact, perhaps – and also note the preponderance of beautiful and ornate graffiti (state-encouraged and -sponsored I’m told)."

I raise the phone to my mouth but once again it’s already locked and I have to key in the passcode and by the time I get into voice memos again everybody has moved on. 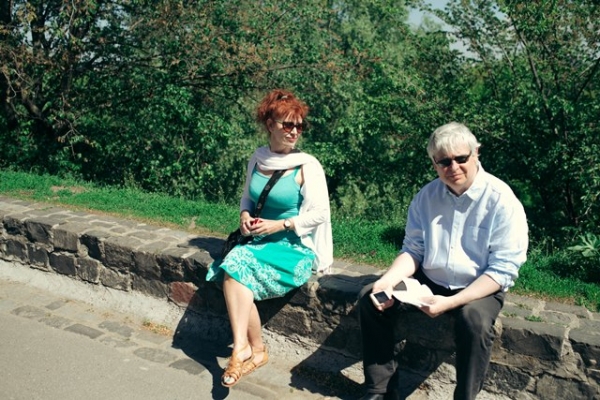 And so it continues. Eventually we reach Andriyivskyy Descent and walk past Bulgakov’s house and I am so enraptured by this district, Kyiv’s Montmartre, that I relax for a few moments and just enjoy its sun-drenched beauty but, always, at the back of my mind, is the thought that my phone has defeated me and, in failing to commit any of my thoughts to its memory, I’ve also failed to commit anything to my own memory. And I’m right to worry about this because it’s not until I get back into London, in a few days’ time, that I pluck up the courage to look at those voice memos at all, and it turns out that there are only seven of them (I must have tried to record about thirty or forty) and six of them seem to be completely silent.

As for the seventh, I have to turn the volume on my phone up to the maximum setting, and when I do I can just about hear myself speaking, in a voice which barely seems to rise to a whisper above the background noise of cars and trams and other people’s chatter, and all I seem to have recorded is the single phrase: ‘Technology anxiety and how it interferes with your enjoyment of places.’

Read the rest of the blogs from Ukraine. 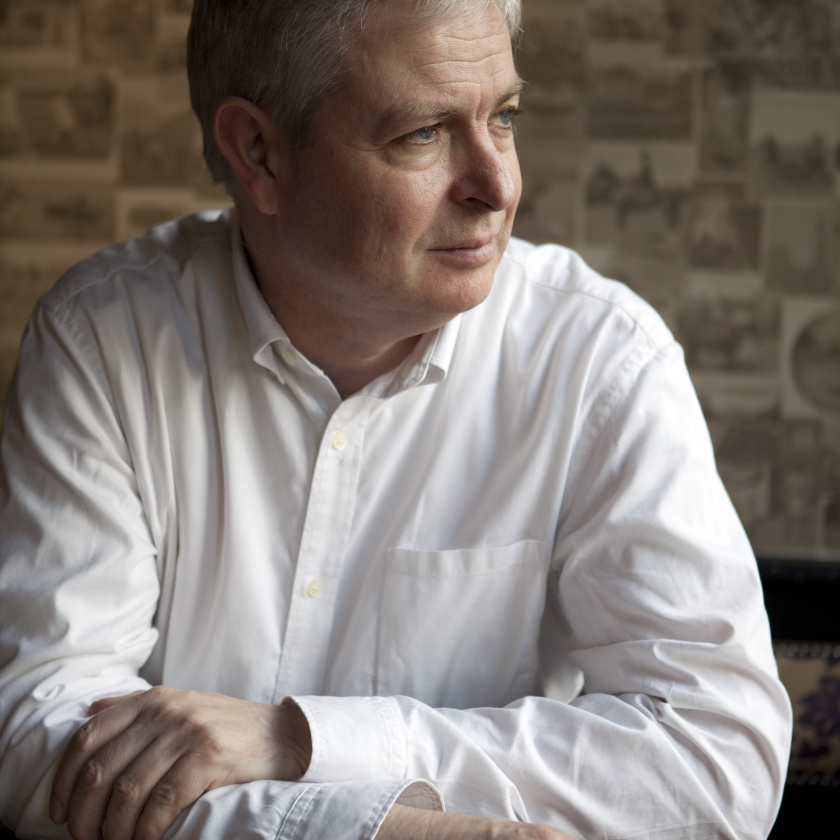 Novelist Jonathan Coe was born in Birmingham in 1961. He was educated at Trinity College, Cambridge,...