Reflections on the Indian Poems on the Underground

Swithun Cooper the Research and Information manager on the British Council literature team blogs about the Indian Poems on Underground appearing on the London tube network in the summer of 2017. 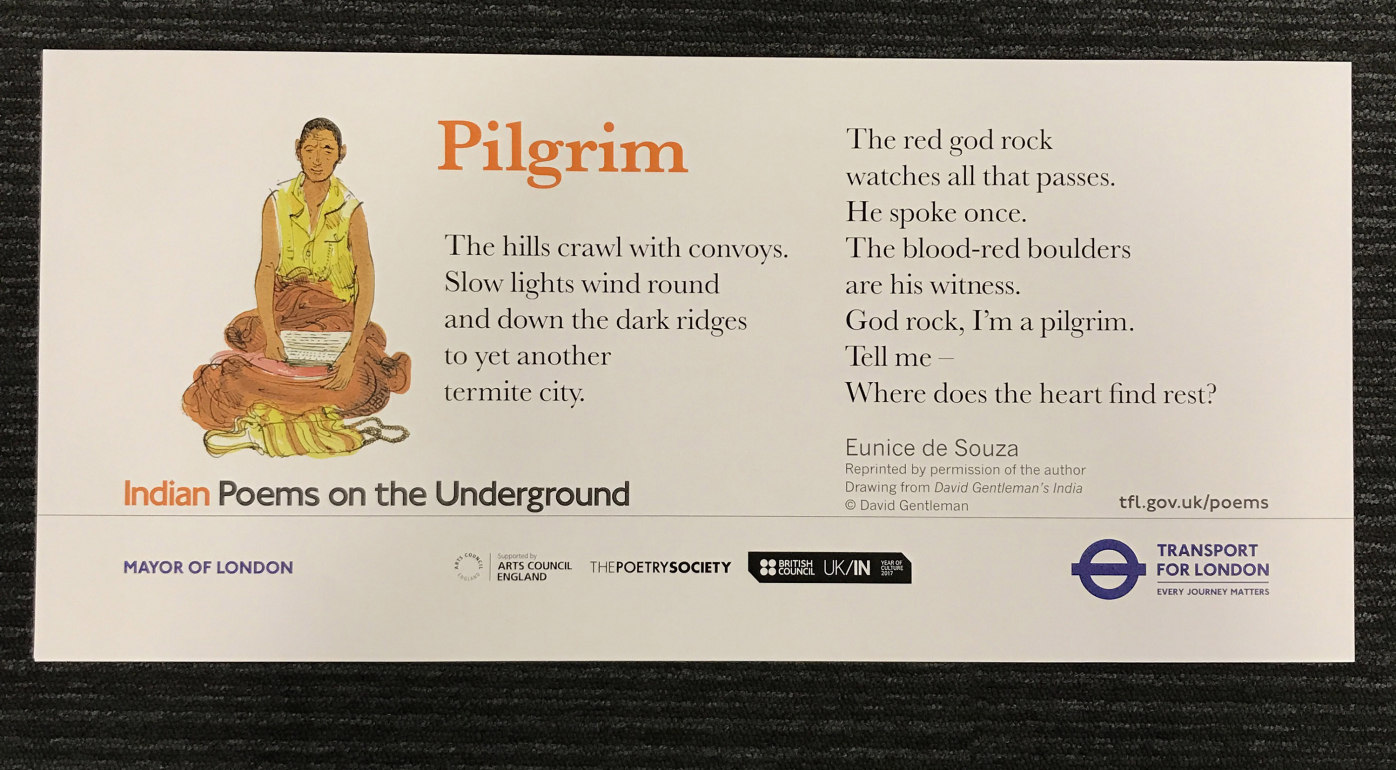 Perhaps it’s in the rhythm of the line – the even movement of the train as it speeds between stations. Perhaps it’s about those stations themselves, and their names that make children ask what they mean. (Boston Manor: is there a manor? Where is Boston? Mudchute: is there really a chute for the mud?) Or perhaps it’s in the journey itself; travelling down into the dark, emerging into the light and a new part of London.

Whether it’s one or none of the above, train and tube journeys have inspired poets for years. Edward Thomas’s ‘Adlestrop’, Auden’s ‘Night Mail’, and John Betjeman’s unlikely ode to Harrow-on-the-Hill are all famous examples. In 1986, however, inspiration struck poets Gerard Benson and Cicely Herbert – alongside Shelley scholar Judith Chernaik – differently, when they arranged to have poems placed in the advertising spaces of London tube carriages.

Poems on the Underground now produces its poems in sets of six, but when it began, there were five: two classic poems (by Burns and Shelley), a modern favourite from William Carlos Williams, and two by contemporary poets, Seamus Heaney and Grace Nichols. In his introduction to the Poems on the Underground anthology, Benson mentions that they had simply hoped “London’s two million commuters would be charmed”, allowing them to discover poetry “here and there, at irregular intervals, in a space usually given over to seductive claims for car insurance or holiday destinations”. They had no idea that it would inspire similar projects in New York, Paris, Moscow and Shanghai, or that their first competition would receive 3000 entries from members of the public hoping to have their own poems featured. The posters have proved so popular that they now appear in classrooms and libraries as well as on the tube, and each new set is sold on the Poetry Society website.

This August, in partnership with the British Council’s UK/India 2017 - a major year of cultural exchange between the UK and India - six Indian Poems on the Underground have been released – some accompanied by artwork from David Gentleman’s India. The poets range from Arun Kolatkar, who was born in 1932, to Mona Arshi, born in London in 1970 to Punjabi Sikh parents. Eunice de Souza, Arvind Krishna Mehrotra, Agha Shahid Ali and Sujata Bhatt also feature, and between these six writers we see poetry moving across borders, dealing with exile, family, and time, and describing vast natural landscapes as well as the smallest details of someone’s face.

Bhatt’s poem, ‘Today’, is not the first of her works to appear on the underground. In 2012 her poem ‘Finding India in Unexpected Places’ was displayed, and both poems explore the experiences of Indian people outside of India. But while in ‘Finding India’ Bhatt celebrates “a yellow fragrance” and “a gesture” she notices in other countries, here she mentions the particulars of her family life in Germany – snow, the “northern sun”, the music of Handel. “How can you be in exile,” she asks, “when you live with the one you love?” Kolatkar’s poem, meanwhile, describes a butterfly moving above the hills, free history and expectation: “There is no story behind it,” he states; “it has no future”. In comparison, Arshi narrows her focus to the “impossible flowers” of a garden, her attention so close that the garden could be anywhere, in India, Britain or another country entirely.

Much like African Poems on the Underground in 2007 and Chinese Poems on the Underground in 2006, these poems are unique and moving individually, but together they paint a wider portrait, reflecting the experiences of London’s Indian population (estimated at over half a million) and of the 400,000 people who visit London from India each year, as well as giving other readers an insight into the variety and specificity of poetry in India and by the global Indian diaspora. Whatever the nationality of the commuters who see these poems, it is as Grace Nichols wrote in ‘Like a Beacon’, one of the very first poems on the underground in 1986: they give some “this link”, and others “this touch of home”.

Read the Indian Poems on the Underground here.