Architecture and Morality: A Love Letter to the Streets of Kyiv 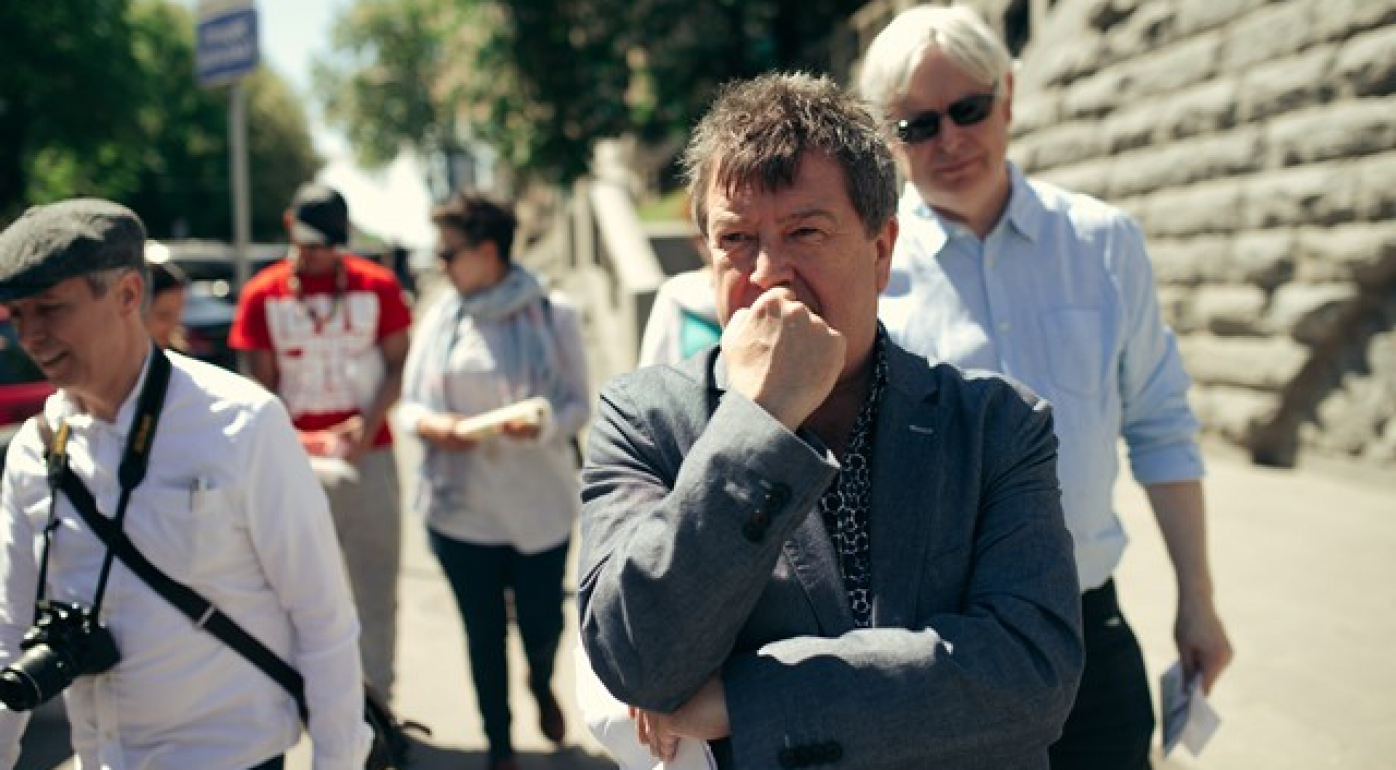 Writing about music, said Frank Zappa, is like dancing about architecture. Frank was always saying things like this, usually with a curled and sneering lip from below his luxuriant moustache. Following the collapse of the former Soviet Union and the ensuing Velvet Revolution, Zappa was offered a prime post in Vaclav Havel’s new Czech government. He turned it down, perhaps as it didn’t afford enough opportunities for sneering. I didn’t get offered any important government positions during my first journey into the former ‘Soviet space’.

“But I did nearly shake hands with the President of Ukraine, and I certainly could have danced with, and to, the architecture of Kyiv, a city whose buildings (and spirit and people) I fell a little in love with.”

The Liverpool group Orchestral Manoeuvres in the Dark once made an album called Architecture And Morality, and I think they would be the first to admit that this meant little beyond being simply a very ‘80s’ thing to say, redolent of cold war chic and austere alienated cool. But it was a phrase that kept coming back to me again and again over my four days here in the capital of Ukraine. The buildings and parks and squares of Kyiv are often beautiful, sometimes bold, and occasionally brutal. But their defiant and dizzying mix tells the story of the city and its people in three glorious dimensions, in concrete, gilt and marble.

If you were to turn the United Kingdom on its side, well, naturally all kinds of mayhem would ensue of course, but that’s not my point. It would then fit easily inside the Ukraine. Ukraine is a big place and Kiev is an enormous, sprawling city, something I got a real flavour of, even as we sped downtown from the airport. I grew up on a large housing estate in a town in the industrial north of England. The skyline was dominated by three sixteen-storey tower blocks, named after great English writers; Thakeray House, Dryden House Masefield House. As a child, they seemed to me to be romantic and imperious castles in the sky, which is perhaps why I have never seen tower blocks as the dreary and soulless encampments some regard them as. So there is something of the awestruck child about me as we speed in from the airport through the vast, fabled commuter suburb of Troieshchyna, Kyiv’s ‘Left Bank’ where, on either side, boulevards of tower blocks sweep grandly away in every direction like giant redwoods in a petrified forest; forty, fifty, sixty on every side, impossibly tall, gaunt and bold. I know, or rather I find out, that these were dormitories in the sky for Kyiv’s workers in the Soviet era, and life in them may have been far from romantic. But they are part of the wild, confusing, exhilarating miscellany of architectural styles and eras that make Kyiv so endlessly fascinating; florid, solemn, stark, ornate, mysterious. 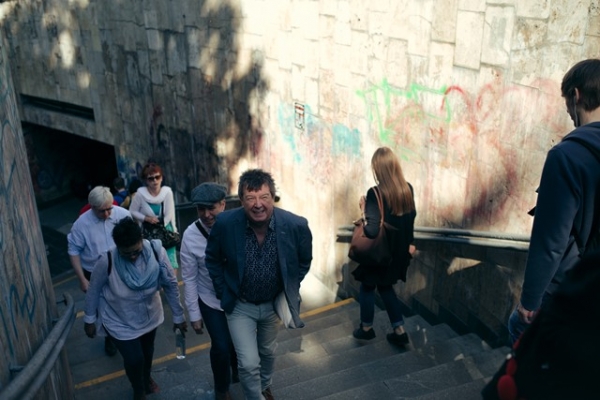 On our first morning, one of our hosts, Alina, led us on a tour through hot, winding streets and a blizzard of pink and white horse chestnut flowers. Nestor the Chronicler wrote in the thirteenth century that the city of Kyiv had been “founded in the forest”. More recently, it was said that Kyiv was a park with a city in it. That may no longer be the case, development has seen to that, but trees still abound. They say it takes a tree much longer to grow even to a medium height than it takes to build a skyscraper, and the trees of Kiev are not giving up yet. Their scent and blossoms were everywhere on the warm wind as we made our way to The Great Gate of Kyiv. This was a thrilling moment for me, and for reasons that were not entirely to do with Kyivan history. The Russian composer, Modest Mussorgsky, wrote a famous orchestral suite called Pictures at an Exhibition, that was, a century or so later, turned into an epic conceptual progressive rock album by Emerson Lake & Palmer. As a music-fixated thirteen year old, this album was one of my favourites; swaggering and grandiloquent, but packed with terrific tunes. Mussorgsky’s famous piece, The Great Gate of Kyiv, from Pictures at an Exhibition, is actually based on a painting, an architectural blueprint for a building that was never actually built. But something stands there now, and even if it seems more ziggurat than gate, I didn’t mind.

“I was in a kind of delighted reverie, wondering what the schoolboy me would have thought, as he listened to ELP’s stirring rendition, if he knew that one day he would be at that very gate as a writer.”

Down huge open boulevards built as monument to state power and a catwalk for tanks and missile launchers, we strode to Maidan Nezalezhnosti, a square that the world now knows. As a Briton, and a foreigner who only watched the events of 2014 on television, I can never know exactly what this huge open space, flanked by grand old hotels and billboards, crowded with stalls and statuary and drenched by fountains, means to Kyivans and many Ukranians. I know that my translator, Irina, said that she could not go there yet, so raw and real were the memories. But even I could feel something powerful in that bright and bustling space at the heart of Kyiv. 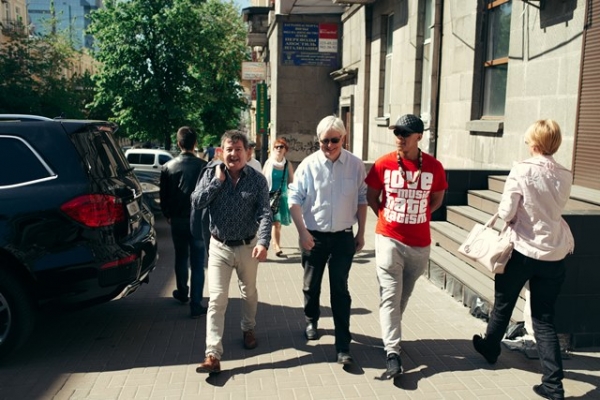 Drifting through the streets like horse chestnut petal, we toured the houses of some of Ukraine’s most famous and important writers. Houses where the avant-garde met secretly in high attic rooms over vodka and blinis, turning the world on its head; Ukrainka, Kotsiubynsky, Vynnychenko, Stefanyk, Kobylianska. Even a list of their names sounds like a strange, lyrical poem to English ears. We curved down the cobbled street of Kyiv’s Montmartre, Andriyivski Uzviz, literally ‘Andrew’s descent’, till we reached Bulgakov, sitting trying to think of that perfect sentence while surrounded by earnest, chatting students and giggling schoolgirls taking selfies. Or at least the old chap’s statue was. Later in the incensed darkness of the Monastery of the Caves, I passed though narrow darkened catacombs, between long dead monks, while intense young women in vyshyvanka and headscarves, holding their candles before them, brushed by me praying softly, their faces framed in a teaspoon of golden light, pausing to stoop and kiss an ancient tomb, all to the glorious, plangent melancholy of the priests chanting. Emerging into the light, I gulped air, having been drowning slightly in the antiquity and intensity of the place.

Read the next blog from Ukraine by Cat Weatherill.

Stuart Maconie is a writer, broadcaster and journalist who works in print, on radio and on TV. His previous books have included Cider with Roadies, Pies and Prejudice and Adventures on the High Teas. He is based in the cities of Birmingham and Manchester.