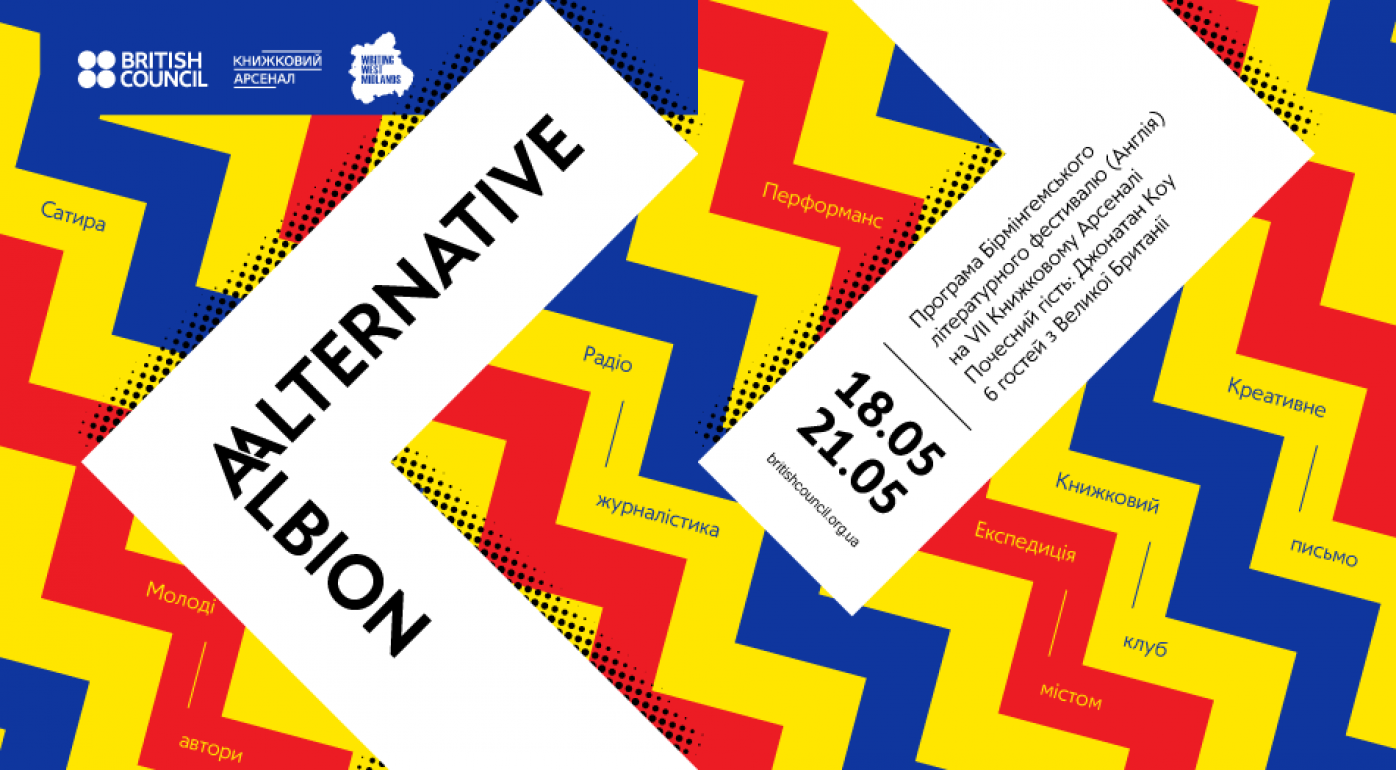 The British Council and Birmingham Literature Festival’s Programme at

Last year, the British Council started a collaboration with Birmingham Literature Festival around its 3x3 residency programme for Ukrainian writers. This year, they’re bringing a delegation from the UK to Kyiv to take part in a curated programme (Alternative Albion) at the VII Annual Book Arsenal.

The aim of the programme is to familiarise Book Fair goers with the UK’s writing and reading cultures. Alternative Albion promises to be educational, performative and eventful, with a lively children’s programme and a research aspect. Programme activities will take place between 18 and 21 May 2017 at the Kyiv Art Arsenal and elsewhere. The programme’s guest of honour is writer Jonathan Coe, and the delegation will also include Jonathan Davidson (Director Birmingham Literature Festival), Stuart Maconie (journalist, writer and radio host), Kit de Waal (novelist), Cat Weatherill (children’s writer) and performer Alan ‘Kurly’ McGeachie.

A radio broadcast of an interview with Stuart Maconie and Jonathan Davidson on “Voices of Alternative Albion, including how dissent alternative voices influence British culture, from the Jarrow Marchers to Johnny Rotten”. 1 pm (BST), 19 May here.

A live stream of “Conrad Book Group: a discussion of Heart of Darkness” Participants: Jonathan Coe, Stuart Maconie, Kit de Waal. Moderator: Jonathan Davidson at 11 am (BST), 20 May. You can watch it here.

Apart from that, we will try to arrange a video broadcast of Alan ‘Kurly’ McGeachie’s poetry performance 'Love and Freedom' which will take place near the entrance of Arsenalna metro station in Kyiv  10 am (BST), 20 May. Watch it here.

The programme will allow Ukrainian readers the chance to discover some of the most exciting contemporary authors from England’s West Midlands. Stuart Maconie has linked his interest in popular music and social policy with his literary talent and fashioned a body of work that presents an alternative modern history of the United Kingdom, while Jonathan Coe employs his memories of growing up in the West Midlands to pen some fierce satire about the process.

Similarly, Kit de Waal draws on material about interracial struggles in early-1980s England to relate previously untold history. Alan “Kurly” McGeachie and Cat Weatherill use performance as a means of expression and a way to engage in dialogue with those who have a story to tell but for whom literature is a closed book. Taken together, these writers and performers give voice to a historically important part of the literary landscape and a region that is experiencing dynamic growth.

The Birmingham Literary Festival Programme at the Book Arsenal will include:

Book Arsenal has also put together the “Kyiv Stories” project, taking the Alternative Albion contingent on an expedition of the Ukrainian capital to experience the atmosphere of the ancient and modern city and get a feel for how Kyivites live. Every city has its own unique textures, sounds, smells and rhythms. To encounter them sometimes requires looking at things in a different way. A compendium of the notes, vignettes and photographs about Kyiv and its residents, as observed and collected by our British guests will be brought together in an “Alternative Kyiv Guidebook”.

The West Midlands Region of the United Kingdom was the birthplace of the Industrial Revolution in the 19th Century. More recently, it has become a centre for education – with eleven universities – and for high-quality manufacturing including Jaguar cars. The region has been the home of many significant writers, from our national poet, William Shakespeare, to contemporary writers and poets including David Lodge, Helen Cross and Benjamin Zephaniah – and the five of the writers who will be part of the Alternative Albion program.

Writing West Midlands is the literature development agency for the West Midlands region. Its work includes running the Birmingham Literature Festival, one of the UK’s most eclectic writing festivals. Last year’s festival included writers from over 14 countries, including participants in the British Council’s 3x3 programme, Halyna Shyyan, Lyubko Deresh and Volodymyr Rafieienko from Ukraine. Writing West Midlands also works with hundreds of emerging and established professional writers to help them sustain their creative careers. To ensure we have writers for the future, Writing West Midlands runs the UK’s largest programme of creative writing activities for children and young people, providing over 200 workshops per year.