Word of the day - translating Shakespeare into Chinese

Chinese translators participating in A Great Feast of Languages - Singapore, our chain translation conferences focusing on Shakespeare, blog about their Word of the Day after translating Hamlet's most famous soliloquy. 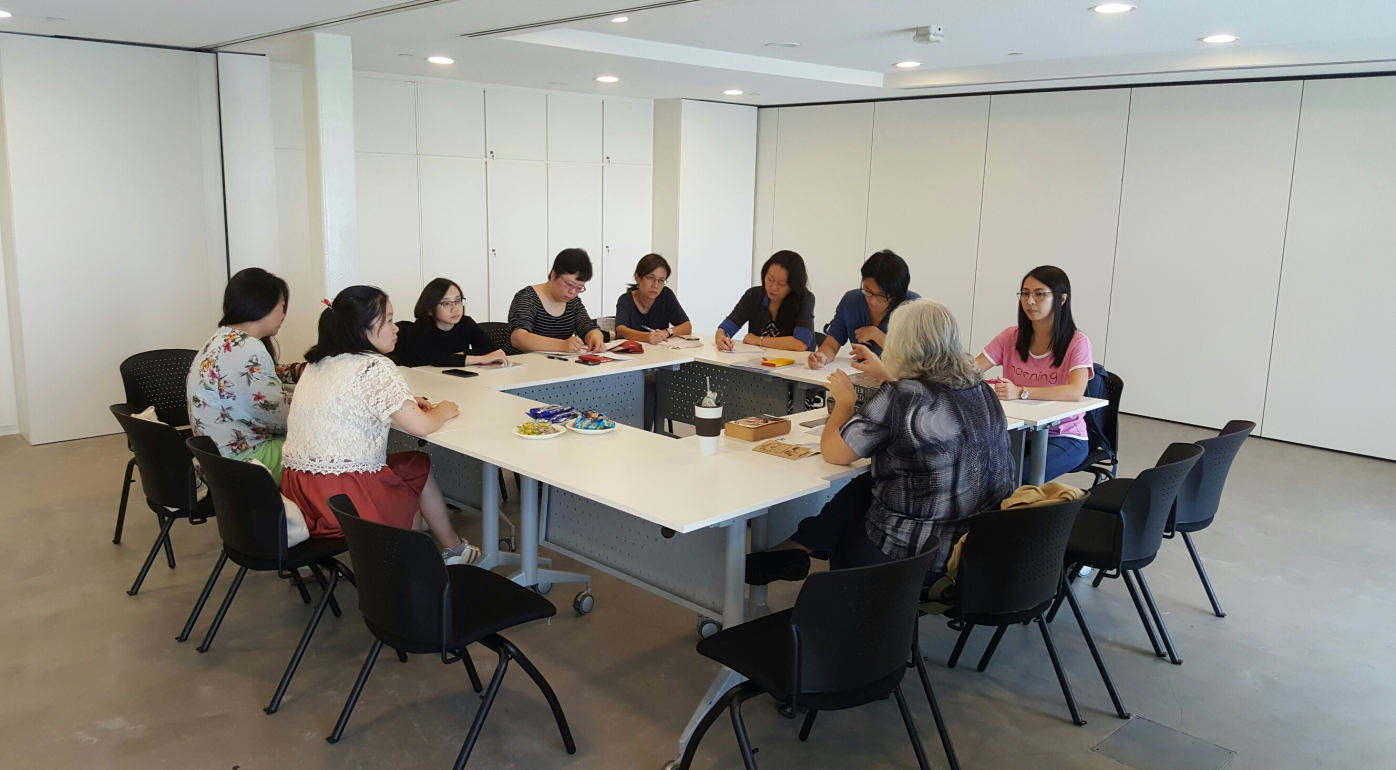 Second blog from the Chinese Translators

On the third and fourth days of the workshop, the group worked on the shared sonnet in Romeo and Juliet.

One point that came through very clearly was that doing literary translation is much more difficult as compared to commercial or practical translations, in that more effort is needed in word choice and sentence structure. This is compounded by the fact that we are translating for the stage, where we have to consider the actors’ speech patterns and how the words would sound as well as how they look on paper.

We also had to deal with many polysemes, ie puns.

For example, the line “Saints do not move” could refer to being unmoved and/or remaining physically stationary. This double meaning works in English, but in Chinese we struggled between terms such as “statue” (圣像) and “goddess” (女神) for “saints”. Such puns are peppered throughout the text.

Another example is “Let lips do what hands do”, which is difficult to replicate in Chinese.

Another issue was the balance between the active and passive voice. While English verbs are quite neutral, Chinese verbs sometimes tend to be hierarchical. For instance, “while my prayer’s effect I take” happens between two parties on the same level, a Chinese verb such as 领受 (to claim) makes one party more subordinate and passive than the other. 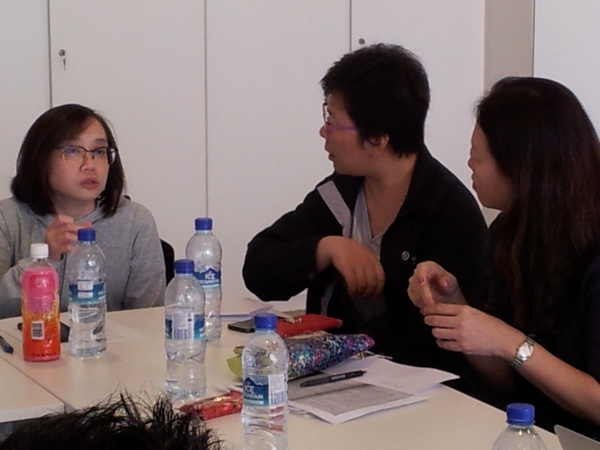 Finally, we found that on stage, not everything needs to be spelled out, since messages can be conveyed through the actors’ body language and eye contact. It all depends on what is the end product and the audience who will receive it.

In the end, we came up with two different (but similar) versions of the same text. One version was more interpretative, while the other was more faithful to the original text. It was definitely satisfying to know that we could actually get two readings of the shared sonnet.

First Blog from the Chinese Translators 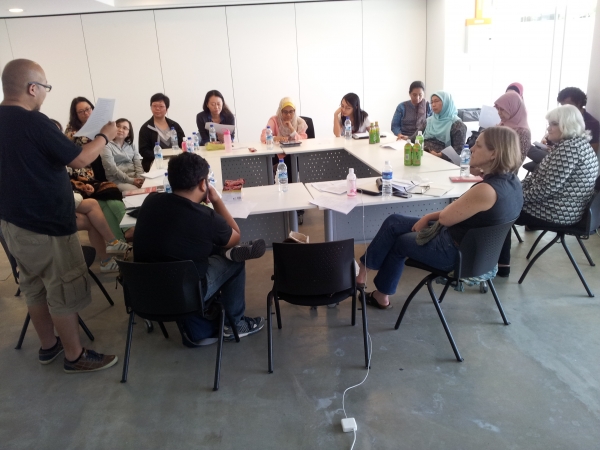 Although the group spent much time deliberating and translating the first sentence of the famous soliloquy in Hamlet, the more thought-provoking discussion arose from two words – “consummation” and “orisons”.

Before we realised it, our religious beliefs and cultural values, however submerged, rose to the fore in our translation. We considered words associated with Taoist, Buddhist, Roman Catholic and Protestant Christian views; or alternatively, perspectives from the western versus the eastern world.

To some, “consummation” was translated as yuan ji （圆寂） which is the attainment of nirvana; to others, it meant resting in peace, an xi（安息）. As our task in translation is from English to Chinese, we decided to use the Buddhist term to reflect our Asian values.

Lo and behold, at the end of the soliloquy, Hamlet asked Ophelia to remember him in her orisons, which the group translated as chan hui（忏悔）or supplication in prayers.

Much pleased with our concerted effort in five short hours in completing the translation of the soliloquy, two actors were invited to join our discussion – to read and to share their views of the completed translation, in terms of the choice of words, the phrasing and their comfort in reciting the piece.

As it was being recited, we felt the power of their speech and the intensity behind each word. They then alerted us to the inherent confusion behind the context of the soliloquy due to the choice of words used, namely yuan ji and chan hui, the former being a Buddhist concept and the latter a Christian concept, therein lies our dilemma.

The group of translators, together with the actors, embarked on an enlightened discussion and after fighting the good fight, agreed to keep to the original setting of Shakespeare’s writing, that is to keep the western/Christian context, thus we arrived at “eternal rest” for “consummation” and “supplication” for “orisons”.

The group of translators and actors reached a happy consensus and thus ended the day of translation, pleased with our effort, and hopefully Shakespeare will be pleased too. 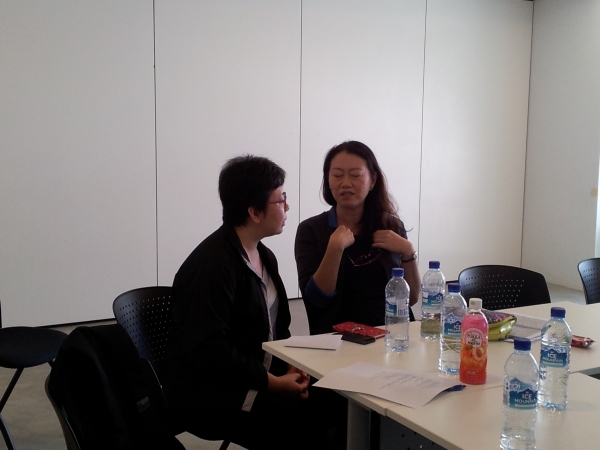 The bloggers are taking part in A Great Feast of Languages workshop in Singapore. A Great Feast of Languages is a year-long international focus on translating Shakespeare for performance, involving a series of translation workshop programmes and a chain of public panel discussions between British and international translators, writers, academics and practitioners. Find out more below. 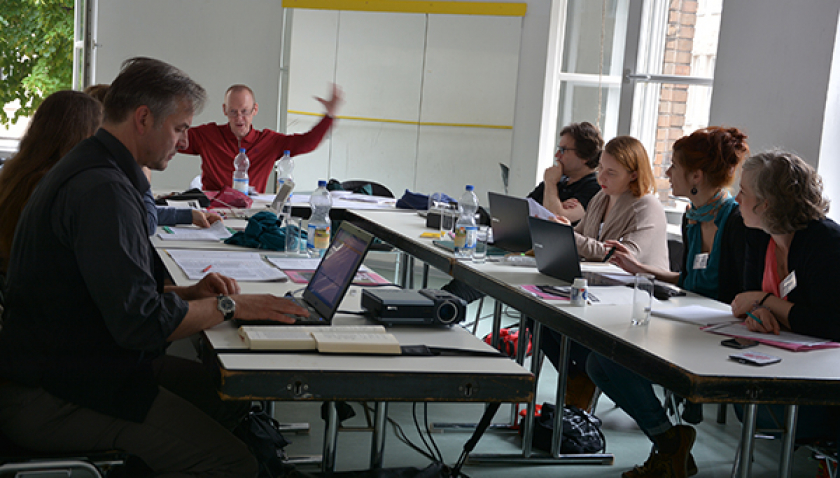