Trading Stories: From Lahore to Lewis

A group of illustrators, musicians and story tellers from Scotland and Pakistan travelled from Edinburgh International Book Festival to the Outer Hebrides. 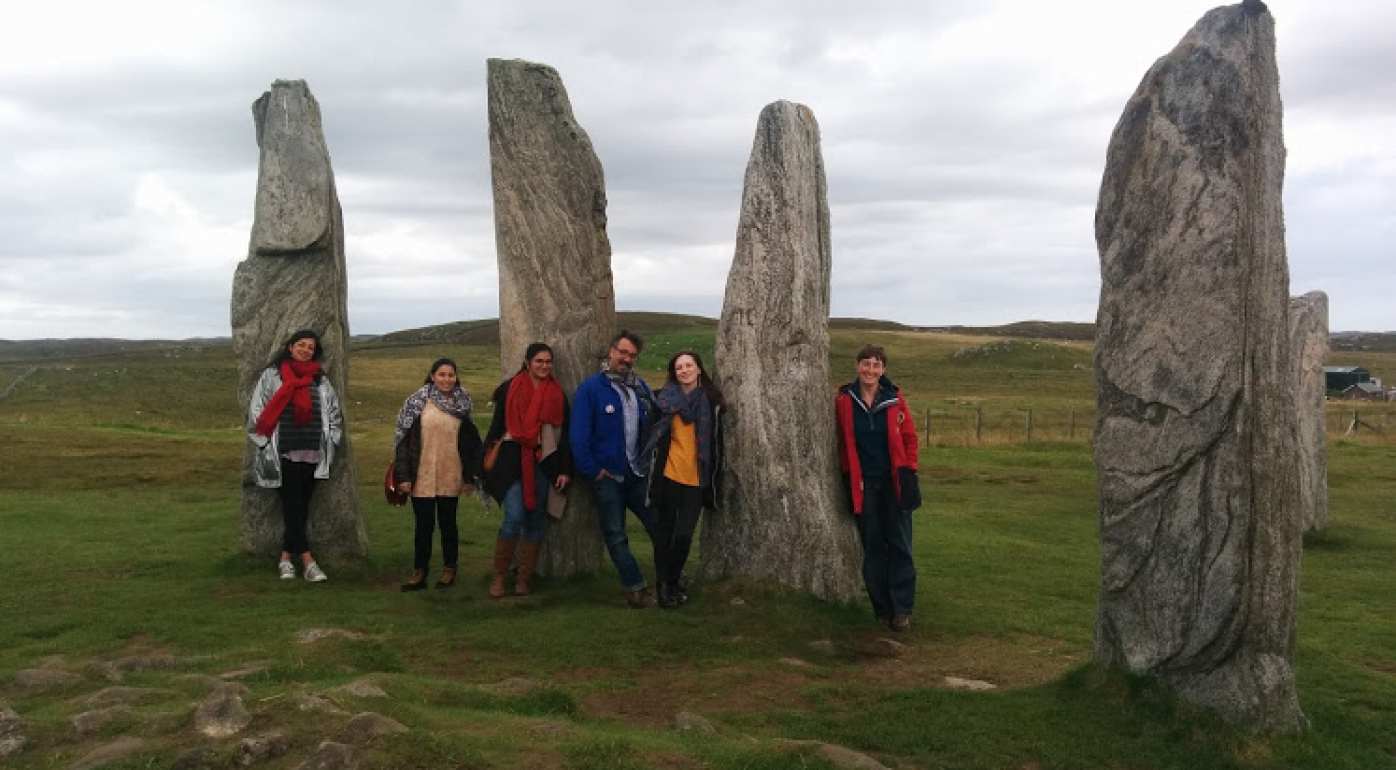 The standing stones of Lewis with the artists, musicians and storytellers. Photo by Ryan Van Winkle

At the end of August 2016 a group of poets, storytellers, illustrators and musicians - who have taken part in an exchange of stories and creative collaborations organised by Highlight Arts - travelled from Edinburgh International Book Festival to the Outer Hebrides to present their work in an event called Trading Stories. On the Isle of Lewis at the An Lannatair Arts Centre, we spoke to Ian Stephen and Shazia Quereishi, two story tellers and poets who took part in the project.

Ian Stephen:  I grew up on the Isle of Lewis and the strongest art form here has always been the oral culture- unaccompanied music. The instrumental tradition is not as strong and is much stronger in the Southern Isles, though recently there has been a growing interest in folk music.

Story telling was always a part of my background and I never thought there was anything strange about that. I was born in 1955 and just caught the last years when people grew up without a television. The television was a serious dunt to culture worldwide.

Before the television there was a village atmosphere. My mother’s family was from the island and we were well known for story telling and political debates. My mother’s stories were mainly about the black sheep of the family- about a character who is in trouble but uses a turn of wit to get out of it. The stories are in the same tradition as that of the trickster. I never thought it was anything out of the ordinary.

On my mother’s side I had an uncle who was a favourite babysitter, as he had so many scary stories. They are the kind of stories now collected by researchers from all over the world. Places like the School of Scottish Studies, the Scottish Story Telling Centre and the Traditional Music and Song Association have done so much to attempt a revival of traditional stories and to record many of them.

But there's no denying that in Scotland there’s been a break in the natural way of stories being passed on from one generation to the next. In the islands – the Hebrides, Orkney, Shetland – and in the community of travelling people there’s been less of a break in the traditional stories.

When I went to Lahore for the Lahore Literature Festival I discovered a number of points of commonality and contact with Pakistani story telling tradition and our Scottish traditions.

Both Pakistan and Scotland share a ballad tradition where stories are sung and both love tragedy. When I was in Lahore I heard the story where a couple are separated in life and meet in death – and that is the same as the Gaelic lament from Lewis, Ailein Duinn. And there is a shared tone and subject matter.

And there is often a twist of wit. In Lahore I was told about the wise Sufi stories and the story I engaged with there, in collaboration with a Pakistani writer, Mujahid Eshai, was the story of The Woodcutter's Clever Wife. It has a strong affinity with the Hebridean story The Crop Haired Freckled Lass – where the crofter’s (or peasant's) daughter is cleverer than the laird (or landowner).

My forthcoming book is a project I have been working on for many years combining sailing and stories – it bridges several categories – with a description of a boat – and of a journey I have done in that boat – and a story it has brought me to – and a poem. It is illustrated with maps and details. It’s a history of my love affairs, but they are all with boats.

Shazea Quraishi: I was born in Pakistan and then my family emigrated to Canada when I was ten and now I live in London. I went back to Pakistan again this year thanks to a grant from the Artists’ International Development Fund. I have been researching a play, based on a transgender courtesan – a character from a Sanskrit play I found in the British Library. You only glimpse the life of women in the original play – and only see them through the male gaze – but I wanted to try to tell the story from their point of view.

I think projects like Trading Stories are very important. People have a very narrow view of Pakistan which is not a true representation and it is important to reflect the fuller, more rounded picture.

I remember many stories from my childhood but my mother wouldn’t tell me scary stories – for example about jinns. My aunt, however, would and she would say a prayer to protect me – as jinns have been said to devour children.

With Ian Stephen we have been finding parallels between our stories, for example with Sufi stories such as the story of The Woodcutter’s Clever Wife. We were looking for common ground – and jinns and the supernatural were one. Ian had the idea that as well as telling a story from Pakistan we should swap stories – which I loved – so that it was a collaboration and exchange.

Whenever you tell a story you change it and tell it in your own voice. It shifts a little bit. Story telling I do mainly through poetry. I am not a traditional story teller like Ian but you could say that story telling is at the centre of everything I do – so the process came naturally.

The Outer Hebrides seemed to me mythical and far away so I was excited to come here. We saw dolphins and seals. The landscape was fantastic and we drove to the standing stones, the beach was surrounded by terns – it seemed to be a whole other world here – very far from London, Toronto or Karachi. 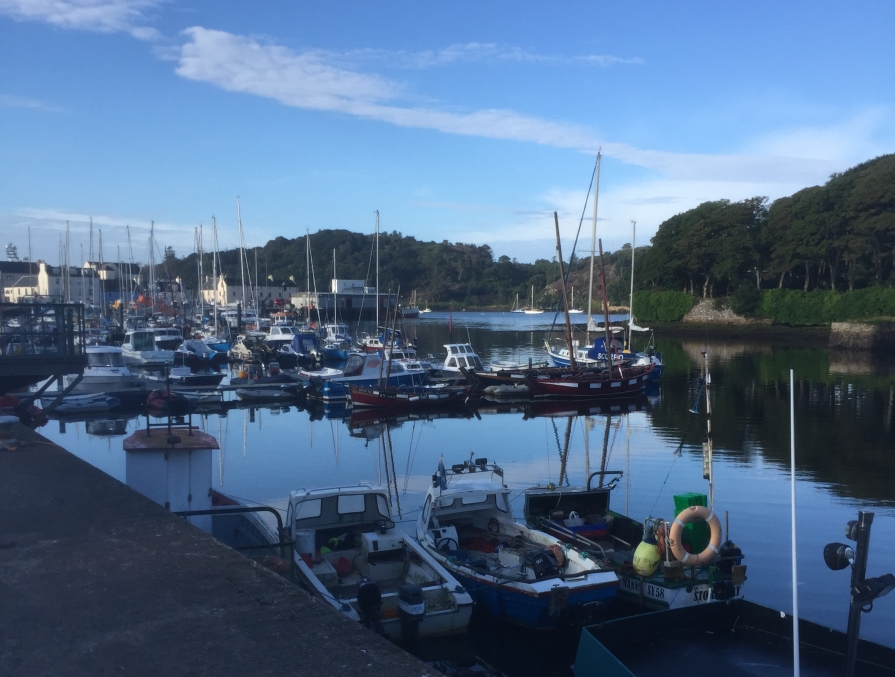 The collaboration comes out of the City to City Project: from Glasgow to Lahore, which you can read about here. The Trading Stories project went to An Lannatair with the support of the British Council and thanks to Edinburgh International Book Festival's Booked! programme, which takes the excitement of the Book Festival on the road around Scotland, throughout the year. Ian Stephen’s book forthcoming from Bloomsbury is Waypoints: Seascapes and Stories (2017). Shazea Quraishi’s collection The Art of Scratching was published in May 2015 with Bloodaxe Books. Find out more about An Lannatair's South Asia Festival here.