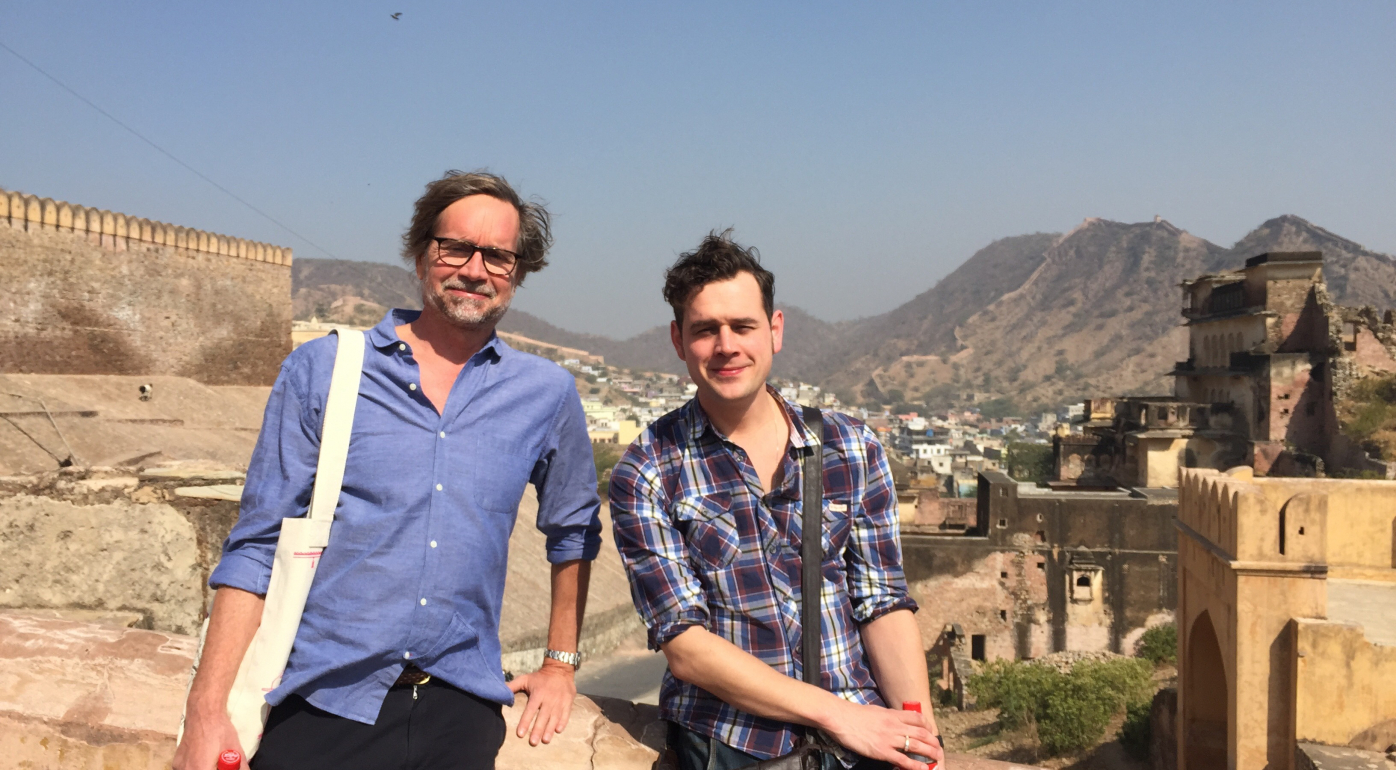 The traffic in Jaipur was intoxicating. I had been warned. The Sikh Brummie who’d taken my visa photos two weeks previously told me he’d visited Rajasthan once. ‘I started writing my will in the cab from the airport. Have fun.’ It was naturally busy around Diggi Palace which hosts the Literature Festival, but no thinner within the walls of the old city where rickshaws dice with giant toy juggernauts, taxis and people-carriers jostle and jacknife through the bookstore district, the herbal remedy district, women sitting in stone arches making garlands out of orange and yellow flowers, stacks of breads for which I quickly forgot the names, the dust, the roar of engines, the constant honking and meeping of various horns.

It soon occurs to you that this is the only way. The car horn (which in England is reserved for registering the utmost indignation after the event) is a kind of metaphysical buffer, used liberally to say thanks, hi, watch out, well done, coming ready or not. If central Birmingham had to deal with this volume of traffic – along with Tuk Tuks, vespas and motorcycles, to say nothing of camels and horses – we’d sit in permanent gridlock as the sun fell and rose, gradually dying of old age in a very English combination of politeness and impotent rage. In reality if you have to cross six lanes of traffic to reach the entrance to your destination, you’d best strike out into the oncoming traffic rather than wait for a purely notional lull. The brightly painted trucks have PLEASE HONK! written on their mudflaps. 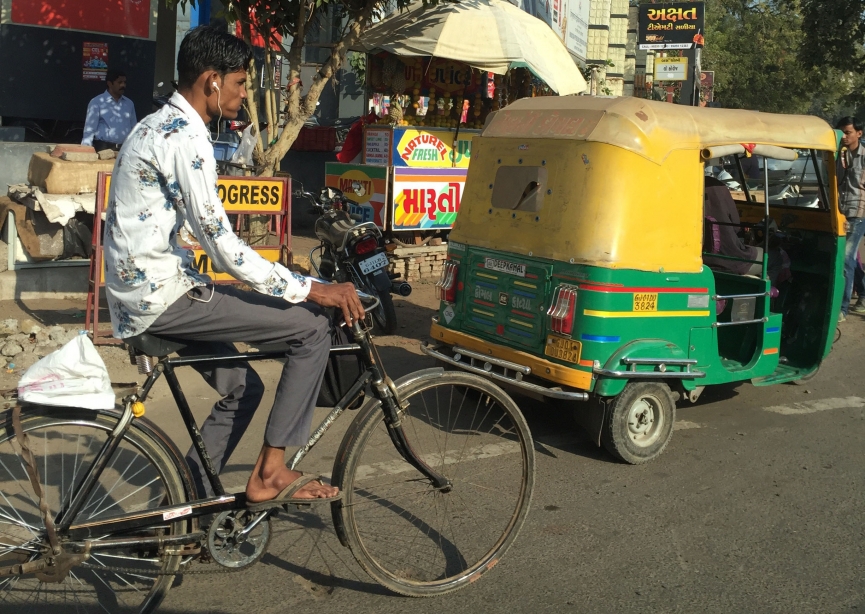 I use “In reality” advisedly; I often felt that I had stepped out of the dream of my everyday life into something more vivid, urgent and fully awake. I felt waves of joy and frustration and I felt very English, very much like a tourist: by turns unassailable and in mortal dread. Later on the hotel terrace in Pune, I sat smoking Gold Flake cigarettes (short, splutter-inducing fags which taste like cigars and cost £1 for 20; delightful) in the shadow of five great generators chanting like football crowds to power the air-conditioning that kept my pasty, drizzle-conditioned body at a comfortable 16° through the night. I thought of Jamaica Kincaid’s iambic refrain: A tourist is an ugly human being, and tried to hear it in the murmur of the vents.

I like being in new places, I like striding off and exploring until I can’t remember the name of the street I’m staying on, but my first trip to India brought out a certain timidity in me. I owe my three hour jaunt on a Tuk Tuk to the fact that my colleagues needed to find a cash-point. I could easily have settled into a routine of nice hotel – air-conditioned car – literature festival, were it not for this and the arranged teaching at a school north of the city. The school contained students from at least five different religious backgrounds and the day began with a  prayer for unity, sung in heart-rending harmony. I had a class of around 150 twelve to fifteen year olds who were raucous and talented. Had there been time I think all of them would have read their poems. In common with the general bustle, the Jaipur Lit Fest has the energy and atmosphere of a music festival in the UK. It was a great privilege to read alongside K. Satchidanandan, whose poem ‘The Magician’ (a masterful, painfully funny exploration of suffering and apathy) will stay with me until the day I die.

I was elated to see the thick clusters of palms and the banyan trees in Kolkata which lined almost every road, a concertina of luxury malls and shacks selling cigarettes and shiny sachets of red betel nut powder (which I didn’t try, c.f. the timidity, even though it would be a lovely thing to add to my list of vices). After the sandier landscape around Jaipur the greenery felt sweetly familiar. Kolkata was also where I met an old friend, Tupa Snyder, who I studied with in Exeter and hadn’t seen for eight years. Hadn’t even written or emailed, in fact, as she had disappeared from social networks. I wrote her a poem in 2011 and published it, but had no way of finding out if she’d read it. Beyond the emotional reunion, this gave me a chance to see some more of the city from a local’s perspective – the apartments and streets downtown. Tupa has four cocker spaniels who did their best to tear out my throat. 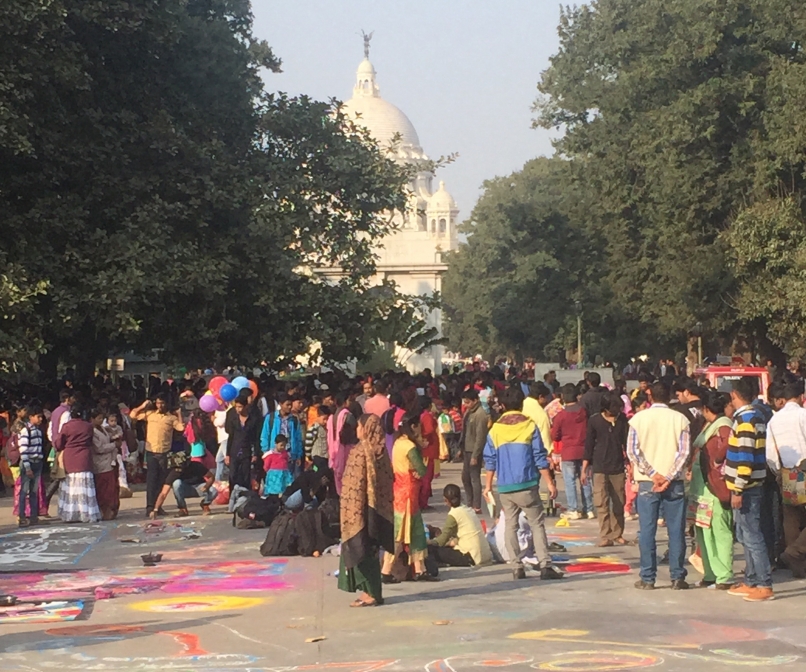 It was also in Kolkata that I encumbered our poor driver to take me to the Greek Orthodox church (I converted 10 years ago before getting married), in between teaching a workshop to students from four schools in the city and a dinner at the Bengal Club. It was rush-hour and an awkward journey, but after numerous curb stops (‘Greek church? Greek church?’) on a six lane road and tramway it emerged: a neo-classical building with a local congregation (I got the feeling there wasn’t a massive Greek diaspora in Kolkata). Inside it might have been an Orthodox church in the suburbs of London, but the icon stands and candles made just as much sense alongside the local shrines to Hindu deities, and seemed to be embraced as such. It was pleasing to see that the church spent its weekdays handing out bags of rice, soap and other basics to long queues of the infirm and downtrodden. The trams were even more beautiful than the buses and had the appearance of being made out of bashed-in decorative tins, bells clanging as we narrowly avoided a side-swipe. 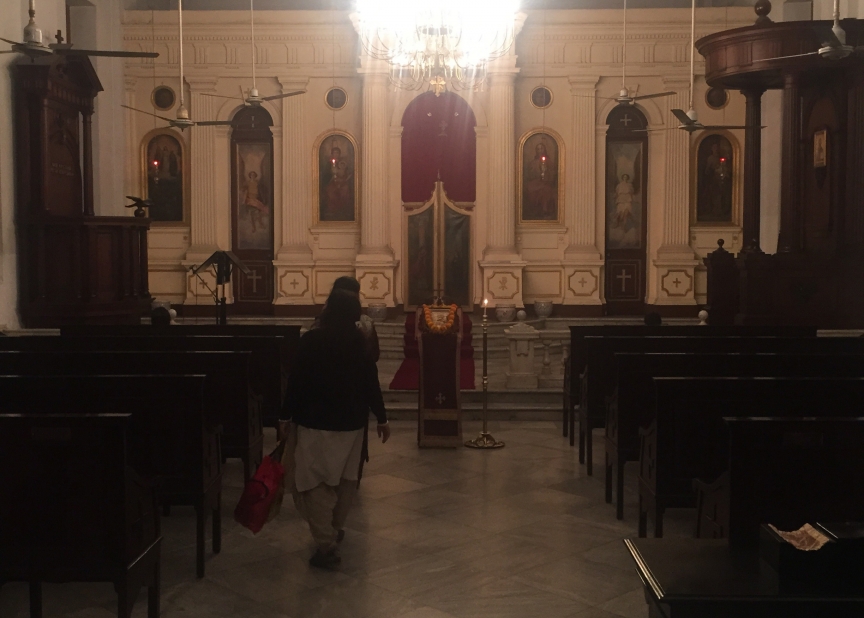 From Kolkata to Ahmedabad. I was on lockdown for Republic Day on the night I arrived, so had to wait until my second evening to buy my wife and mother-in-law dresses and shawls from the night market and get royally hustled by a shoe-shiner to whom I’d not had the good sense to flick a hundred rupee note and keep walking. Gujarat is a dry state, which means they’re very inventive with soft drinks and teas. I had something bright blue with jasmine and mint. I was recovering from an inevitable stomach upset so it probably did me good to have some enforced nights off drinking, and likewise improved the quality of my workshops in the Ahmedabad British Council Library (with a generous and sparky writers group) and a new university in Gandhinagar (with Engineering students who had formed a poetry society). Before leaving I had time to visit Gandhi’s Ashram: a humbling experience of several levels.

Out of the many things the British Council provide for writers, I was particularly grateful for their logistical patience and expertise. I didn’t have to find my own way: I never had to stagger into the classroom fifteen minutes late, sweating and weeping (and my students will attest that this is frequently the case in the UK). I felt that the BC could probably organise a poetry workshop on the moon and all I’d have to do would be to take my protein pill and turn up at the launch pad with my wheelie suitcase.

Read the blogs from Melissa Lee-Houghton and Mark Waldron 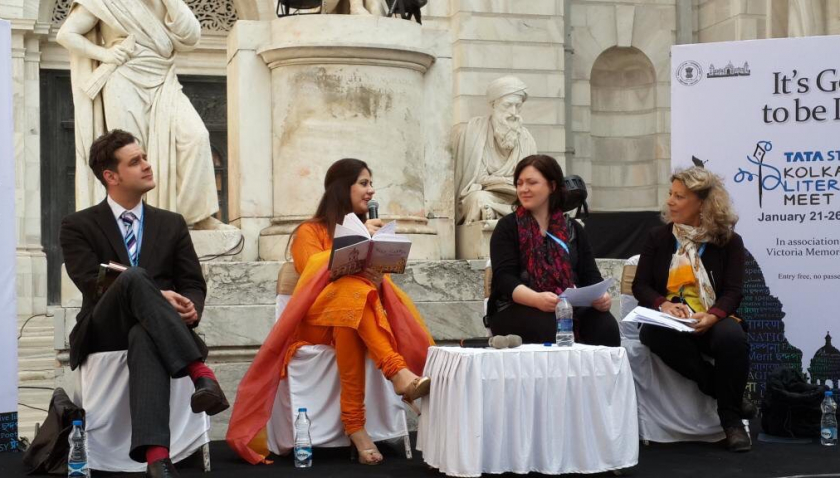 The British Council and the Poetry Book Society are collaborating on an international showcase of th... 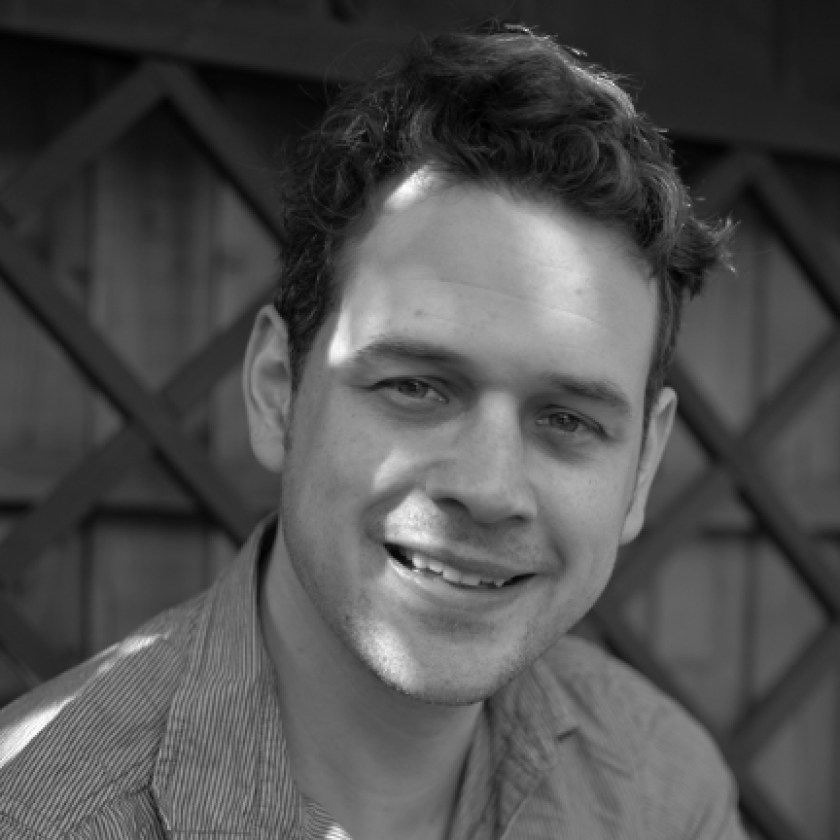 Luke Kennard was born in Kingston-upon-Thames in 1981 and grew up in Luton. He is a poet and writer ...