For the next in our series of monthly blogs, we asked the author and academic Preti Taneja to share her thoughts on 'Global Shakespeare'. Her piece is inspired by a book published in 1916 to commemorate the 300th anniversary of Shakespeare's death. Taneja takes us forward to Shakespeare's next centenary, and poses the provocative question - what people then will think of us now? 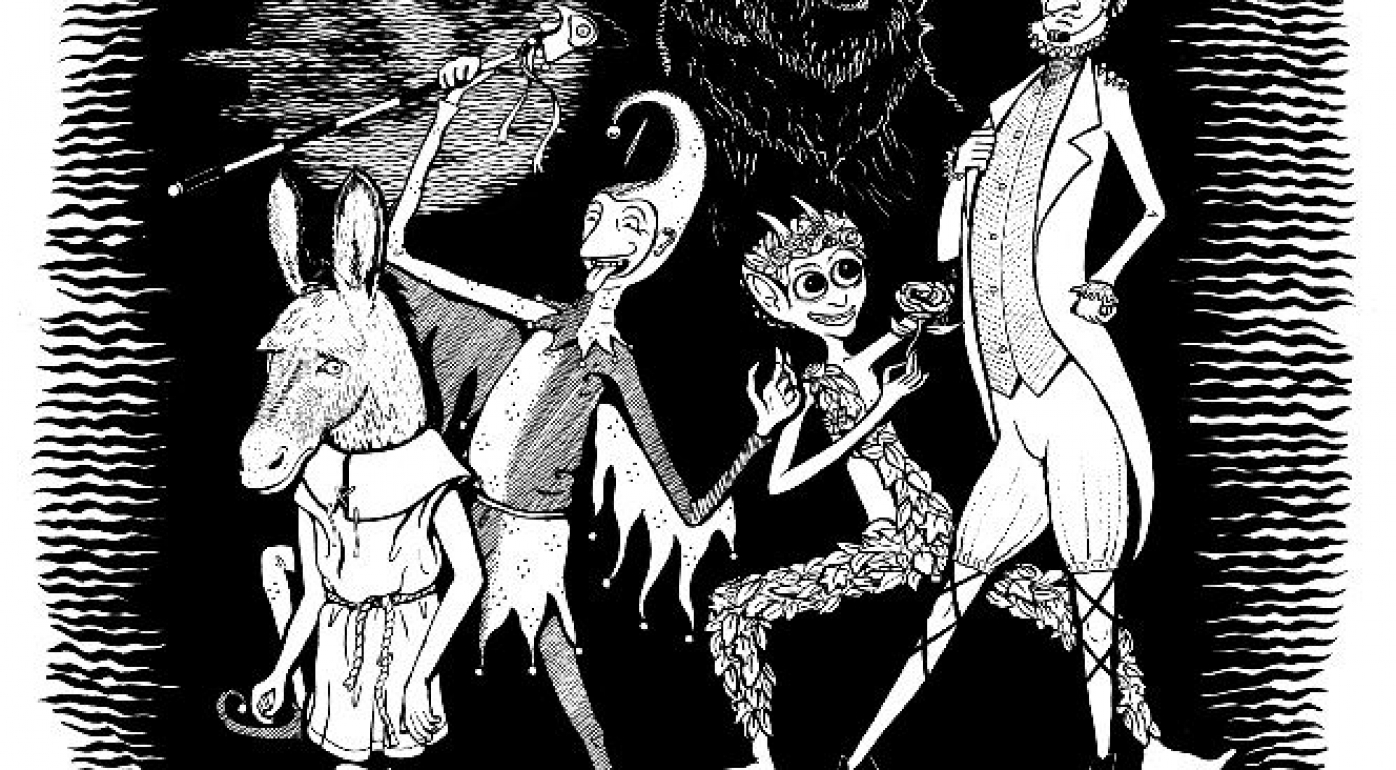 Fast forward to 3016: the 500th anniversary of Shakespeare’s death. In a hundred years from now, beings, human, posthuman and digitally enhanced plants might be able to rocket up to planet Venus for a meta-rendition of Midsummer Night’s Dream in Venusian. Maybe The Tempest will be screened directly from the Sea of Tranquility into brains back on Earth. Hopefully, who gets to see these productions won’t depend on which country colonises space first, and all languages will be infinitely understandable. Whatever happens, I’m certain that some alien being in an intergalactic university far, far away will hold a conference or conduct some research into how we commemorated Shakespeare back in 2016. It will be their way of understanding Shakespeare’s ongoing influence, but also of trying to work out what the 2016 commemorations reveal about us, their long lost ancestors, and our incendiary times.

If they concentrate on events in the UK, I wonder what they’ll make of the Shakespeare not stirred cocktail recipe book, the Shakespeare rubber duck, the tea towel and poster ‘Everybody Dies’ which depicts the body count of the tragedies in an easily digestable list? And what will survive of the myriad stagings, from ‘original practices’ to digital ones? Imagine the students pouring over fly-bills and posters from English-language Hamlets touring to every country in the world, or the first ever all-black performance of the play the UK has seen, touring, more modestly around the English regions? Then there’s the refugee Shakespeare played in inner cities, in the shadows of headline productions that pack in the crowds.

And they might come to the posters, stills and archive footage from the BFI film festival in London which, in April, showed twenty extraordinary Shakespeare adaptations from Asta Nielsen’s silent-era Hamlet, (1921), to Vishal Bhardwaj’s 2014 version Haider. Where the first film has Hamlet the girl, brought up as a boy coming to terms with suppressed sexuality and gender identity, the second uses Shakespeare to pull colonial threads and unravel a history of British influence on Indian brutality in the 1990s, as the state cracked down on the people of Kashmir. When our future scholars try to decipher us via our Shakespeare commemoration, making money, holding onto or subverting power and questions of personal, political identity and citizenship might shape their research findings.

Shakespeare, our scholar might conclude, acted as a whetstone in 2016. For some, to sharpen a sense of national greatness by riding on the playwright’s coat-tails. For others, to hone our ability to speak back to that sense of power, via a set of plays that, for better or worse, are globally recognisable and are translated into different forms and hundreds of different tongues. This diverse, but shared Shakespeare offers an example of what it means to be a world citizen today.

So I also wonder what our scholar will understand of us when they read, as of course they will, our commemorations against the rising right wing nationalism of these present times in the UK – when – according to the British Prime Minister Theresa May, ‘to be a citizen of the world is to be a citizen of nowhere.’ If our scholars look back a further hundred years to the Shakespeare commemorations of 1916, they might find this stark, negative sentiment difficult to understand.

The Book of Homage to Shakespeare was published for the 300th anniversary of Shakespeare’s death. It first came out despite, and in the midst of the First World War. It brought together, ‘Shakespeare’s own kindred, whatsoe’er their speech,’ as the editor Israel Gollancz, wrote, and included essays, poems and reflections from one hundred and sixty six eminent writers worldwide, offering a unique and almost panoramic view of social and cultural attitudes of the time.

As the Observer noted in its review on 23 April, 1916, the Book was meant to represent ‘the English speaking world, our Allies and the neutral states,’ and was intended to ‘be a record of the widespread reverence for our national poet,’ and the spirit of Shakespeare’s genius as an Englishman, and the British Empire’s reflected glory was never far from its pages. One of its contributors, a former High Commissioner for New Zealand, entitled his poem The Dream Imperial, claiming that as the ‘young adventure’ of England, ‘Moved surely outward to imperial space,’ he took Shakespeare’s mind with him. The author of the poem, one W.P Reeves, takes a pop at native translators of Shakespeare here, writing,

They bore his universe of tears and mirth

In battered sea chests to the ends of earth,

So that in many a brown, mishandled tome,

- Compacted spirit of the ancient home -

He for whom man the human chart unfurled,

For Reeves, the countries of Empire were compacted versions of England, and their versions of Shakespeare could only be ‘mishandled’ ones. Meanwhile, the children of England and their ancestors at home and abroad, had Shakespeare to remind them of their ‘father’s land,’ nostalgically and triumphantly.

But despite pieces like this, the book could not, and nor did it seek to, limit a very Shakespearean sense of escaping imposed borders of all kinds – national, gendered, linguistic – to create a shared more equal world. After all, the book is full of translations and this itself is a subversive act.

Rabindranath Tagore, the poet, education reformer and staunch advocate of the idea of ‘world citizenship’, won the Nobel Prize for Literature in 1913. His piece, called, simply, Shakespeare removes the literary genius of the man from his national identity as Tagore self - translates,

‘When by the far-away sea your fiery disk appeared from behind the unseen, O poet, O sun, England’s horizon felt you near her breast, and took you to be her own.’

But Shakespeare transcends this, and Empire itself, in Tagore’s poem, as he writes, ‘Then, at the silent beckoning of the Eternal you rose higher…making all quarters of heaven your own.’

It’s that placement of Shakespeare as beyond England that allows Tagore to end his piece,

‘Therefore at this moment, after the end of centuries, the palm groves by the Indian sea raise their tremulous branches to the sky, murmuring your praise.’

By 1916, Tagore had travelled widely to England and around Europe, he knew in his own lifetime what it meant both to be lauded by people from many languages and cultures for his writing, to be translated and set to music from both East and West. Not long after, as Indian Independence loomed on the horizon he learned what it was to have his works placed at the heart of national discourse, and around what it means to be truly free. Perhaps because of this, he also understood that Shakespeare’s skill should be recognised but separated from a sense of national identity or national cultural dominance, and that he could be most fully appreciated and enjoyed in new translations and forms.

Tagore was not the only one in the Book of Homage to make this connection. Nicholas Velimirovic wrote in praise of the power of the British Empire in his essay on Slav Shakespeare, and believed that Shakespeare was the ‘primordial creator and inspirer’ of that Empire, as well as the giver of a special education on, ‘how to make it move forward towards progress and civilisation’. He went on to qualify this, saying,

‘I speak of the nation as a whole, the narrow patriots of this island  - if there are any - have nothing to do with Shakespeare and are rather destroyers than supporters of the glorious Shakespeare’s realm.’

What is this mysterious ‘Shakespeare’s realm,’ if it is not England? Velimorovic observed, ‘Shakespeare’s Kingdom, adores no man and despises no one.’

Our future scholars might be living in a universe where this hope has been realised, or they might not. Certainly, they might wonder if we learned anything from 1916’s hopes and divisions; I wonder now, what they will learn from us.

Preti Taneja's debut novel, We That Are Young, a retelling of Shakespeare's King Lear set in contemporary India, will be published by Galley Beggar Press in 2017. Her academic research considers Shakespeare's plays in translations of language and form, as they are produced by people living through current conflict and postconflict situations. As one of the AHRC/ BBC's New Generation Thinkers she broadcasts primarily on literature and culture from a postcolonial perspective. www.preti-taneja.co.uk

@LitBritish RT @BBCRadio4: The 2021 BBC National Short Story Award with @Cambridge_Uni is now open for submissions! The closing date is 9am (GMT) on…
(10 hours ago)