"Women in Kurdistan are Not Passive Victims": An Interview with Choman Hardi

The Niniti International Literature Festival launches on the 22nd of April in Erbil, Iraq- a continuation of the Erbil Literature Festival, now in its third year. 'Niniti' is a Sumerian epithet meaning 'lady of life', chosen to reflect the festival's focus on women's writing. Choman Hardi is a Kurdish poet and academic. Her poems have been published by Bloodaxe Books and celebrated widely. She has a PhD on the effects of forced migration on Kurdish women from Iraq and Iran and her post-doctoral research, published by Routledge, was concerned with gendering the Anfal genocide in Kurdistan-Iraq. Forced to flee her homeland twice, she is also the founder of Serdemi Jim, a journal of women's writing and culture. Here she talks to us about women in Kurdistan, the effects of voyage and return on the immigrant's identity, and the intersection between poetry and politics. 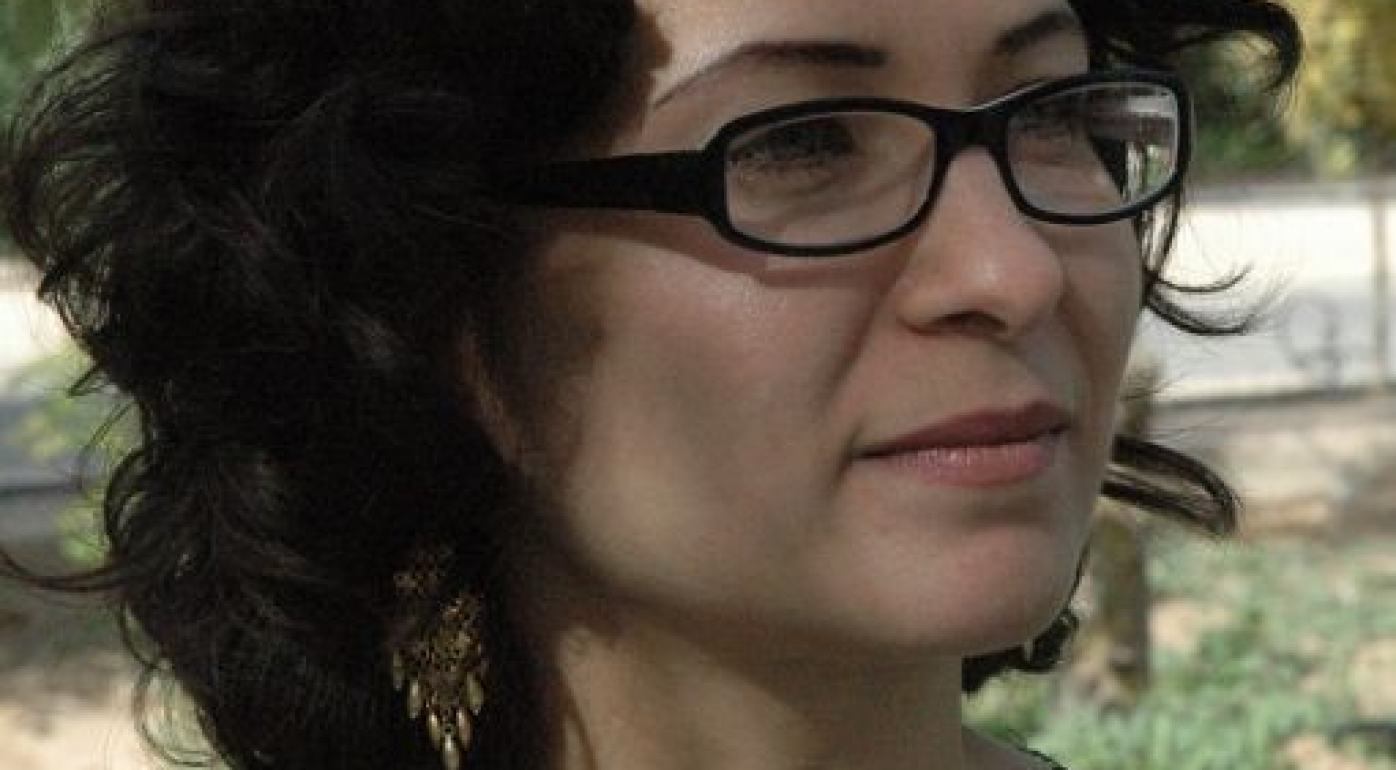 1. You were born in Iraqi Kurdistan and after being forced to leave have returned many times. Does returning to your homeland feed your writing?

Swinging back and forth between two places may be an indication of the immigrant’s ‘in-between’ identity, of the loss of that perfect sense of belonging which once existed and is no more. This memory of belonging, of feeling whole, keeps pulling us back. At first we naively think that if only we go back, if only we can walk those streets again and live near our childhood school, next to our extended family and friends, we may be able to fully belong once again. But this is a myth. Homeland, with all its post conflict troubles, breaks our heart. We feel alienated from it. We also underestimate how much living away has changed us, how sensitive we have become towards the social inequalities that are widespread in post conflict zones.

Research proves that political violence has the ability to consolidate gender inequality and to lead to the rise of a narrow and violent form of masculinity which connects honour to the control of women’s bodies. As immigrants we struggle with these issues. Our dissatisfaction with the status quo keeps pulling us towards our homeland. Our immigrant’s dream to ‘make things better’ keeps us involved, we keep going back and we try to initiate ‘potentially healing’ projects to provide an alternative discourse for the younger generation.

Grappling with these issues occupies a large part of my life. I have tried to make sense of them in my poems, articles and in my academic writing. I am still trying to understand the mechanisms of power which lead to the marginalisation and oppression of large sections of people in my community. These issues unavoidably feed into my creative output.

2. Do politics cross over into your poetry?

For writers like me whose lives have been shaped by political events, it is inevitable that politics enters our poetry. However, this also depends on other factors, like the many identity transformations we go through, our stage of life and our personal circumstances. I have met many poets from zones of conflict who, after years of writing about conflict in their homeland, were writing about the calmer and quieter worlds of nature and love.

In my late teens and early twenties I was busy learning English, getting into and studying at university and adapting to my new life in England. At the time in order to manage the linguistic, cultural and social tasks required of me in order to adapt to my new environment, I subconsciously shut off many things related to my homeland. I was fed up with the passionate political arguments at the Kurdish gatherings, I mocked the vicious circles Kurds found themselves in and I was angry with the violence. At that stage I was focused on myself and my own small world, in which personal relationships and love played an important part. This was reflected in my earlier Kurdish poetry.

Later, when I started writing in English in the early 2000s, I was more comfortable with my new language and culture and I had acquired some distance from my traumatic past. It was at this stage that history and politics became important once again. Many of my earlier English poems include dates in their title and they address specific events in Kurdish history. For example, ‘At the Border, 1979’ addresses the return of Kurdish refugees from Iran after an Iraqi amnesty, ‘The 1983 Riots in Suleimanya’ addresses the students’ demonstrations against the Baath regime during which many students were arrested, tortured and killed, ‘Lausanne, 1923’ addresses the Treaty of Lausanne and the division of Kurdistan, ‘Dropping Gas, 16th March 1988’ is about the gassing of Halabja, and so on. I suppose my English collection, Life For Us, can be seen as a political book in itself, in that it tackles the stories and myths that inform the identity of an oppressed group, an identity which until recent years was silenced and sidelined by the mainstream and dominant discourse. Lately a different kind of politics has entered into my writing, that of gender oppression.

3. Your new poem, ‘Homeland, What shall I do with you?’ contains the line ‘Force and violence are brothers and women are alone’. Can you tell us more about the experience of being a woman living in Kurdistan?

Women are more vulnerable to oppression during violent conflict. In Kurdistan, even when the protective No Fly Zone was set up in 1991, closely followed by the establishment of the Kurdistan Regional Government in 1992, violence continued in a different form. Civil war between the ruling Kurdish parties (1994- 1998) and the sanctions imposed by the international community and the Iraqi state (1991- 2003), combined with the comeback of tribalism and the rise of radical Islam resulted in instability and violence. The establishment of the women’s organisations in the early 1990s to deal with gender inequality (an issue which was long suspended by the Kurdish revolution), was another factor which provoked a reaction from the system. We know that patriarchal systems are resilient, so much so that when one form of violence or oppression is outlawed, another form is found to continue the gender hierarchy. Even though some laws regarding gender inequality have been reformed in the Kurdistan Regional Government, most of the time they are not implemented.

We also know that laws don’t necessarily change values and attitudes; women may be oppressed in many ways other than the legal ones. This is the situation for women in Kurdistan. The women’s movement has managed to exert pressure and bring about some legal reforms, but these changes have provoked major reactions from the patriarchal system, making it in some ways subtler: less ‘honour’ killings and more suicides, for example, and at the same time more violent: there has been a consistent yearly rise in domestic violence. Yet women in Kurdistan are not passive victims. Some of them fight the system, some of them keep their heads down and try to survive it, and some of them take part in the system and oppress other women, through internalising patriarchal values. The battle for a better world continues and women, along with young people, are the driving force for change.

4. You have written extensively about Kurdish women, both in your poetry and your academic research, and you edit a Kurdish women‘s journal called Serdemi Jin. What is the significance of the Niniti Literature Festival to you?

Festivals like Niniti are highly significant. I believe such initiatives can address a number of important issues at the same time. First of all, they provide a platform for women writers who are usually sidelined by the mainstream media and culture (I myself have never been invited to give a poetry reading in Kurdistan, even when I have spent large chunks of time there).

Secondly, by bringing creative women into focus, these festivals do more than provide an artistic platform: they combat the image of woman as a powerless, ineffective, untalented and therefore dispensable being. Changing negative stereotypes of women requires constructing more positive images. It is essential to use various channels to reconstruct the image of women in this region and literature, and the arts in a broader sense, are a brilliant tool with which to achieve this.

Thirdly, providing a safe space for women to have a creative dialogue is also essential for creating solidarity and hopefully more effective collaboration. This is especially true when women writers from different ethnic and national groups are brought together. Women, and especially Iraqi women, need more of these exchanges. Dialogue can lead to the creation of new ideas to help with the struggle against the patriarchal system. This understanding, that women need to have dialogue and to learn from each other, was one of the reasons why we founded Serdemi Jin. The journal consists of three sections: “Theory and Research”, “Art, Literature and Culture” and “History and Archive", and it aims to become a platform for Kurdish women's academic and creative work. It also aims to highlight women's role in history and to document their contribution to society by including biographies and profiles of the women's organisations. Most importantly the journal aims to provide “the missing space for exchanging ideas within the women's movement in Kurdistan and between this movement and the feminist movements in other parts of the world.”

Fourthly, political violence destroys trust, friendship and respect, and replaces them with suspicion, competition, and selfishness. Literature has the ability to help recreate the severed bonds in this community, it has the ability to repair, heal and reconnect us, to reverse the dictator’s work. This is why I hope that Niniti Literature Festival will create a healing and positive ripple across Erbil, Kurdistan and Iraq.